On July 6, PBGC released additional guidance on implementing the Special Financial Assistance (SFA) program of the American Rescue Plan Act (ARPA). The Final Rule provides additional clarity on aspects of the SFA program initially defined in an Interim Final Rule (IFR) and how PBGC will administer the program. Provisions of the Final Rule become effective August 8, 2022, with the guidance applicable under the IFR remaining in effect until that date.

Under the Final Rule, some aspects of the program have remained the same while others are changed or clarified based on comments received from the multiemployer community and other regulatory agencies. These comments identified areas needing refinement, practical considerations and challenges identified by plan service providers and trustees, and opportunities to improve the likelihood plans that receive SFA money remain solvent through and beyond 2051.

This Alert addresses what’s the same under the final rule, what’s changed, and transition considerations for multiemployer plans that have already applied to receive SFA funding.

There are various aspects of the SFA program that did not change with the issuance of the final rule. These include:

The PBGC made a variety of updates to the SFA program in the Final Rule, including addressing investment restrictions on SFA funds, the SFA calculation method, conditions placed on plans receiving SFA, and certain SFA application requirements.

PBGC’s original guidance required all SFA assets to be invested in investment grade fixed income. The Final Rule relaxes that requirement to allow up to 33% of the SFA assets to be allocated to return-seeking investments such as stocks and equity mutual funds. The Final Rule requires plans to meet these asset allocation restrictions at the time of the initial investment purchase, with rebalancing required at least annually thereafter.

PBGC notes that permitting allocation of a portion of SFA assets to return-seeking investments strikes more of a balance between investment risk and return than the 100% fixed income allocation in the IFR. This allows plans to achieve a higher long-term return and increase their ability to project that they can remain solvent through 2051.

Considering the expansion of the permissible asset investments, PBGC modified the interest rate requirements for discounting projected plan cash flows in the SFA calculation. Under the IFR, a single investment return assumption was used to discount cash flows to be paid from plan assets, with no distinction made between expected returns on SFA and non-SFA assets. This created an “interest rate mismatch” between expected return on SFA assets and the return assumption used to discount cash flows paid from those assets, which in turn caused the amount of the calculated SFA to be insufficient to reasonably allow a plan to pay all benefits due through the 2051 plan year.

Use of a lower expected return assumption for SFA assets produces a larger SFA amount.

The IFR did not include any special provisions for determining the amount of SFA for plans that had previously implemented benefit suspensions under the Multiemployer Pension Reform Act of 2014 (MPRA). The Final Rule creates a different SFA calculation for these plans that recognizes the effect on future solvency that accompanies the reinstatement of suspended benefits. The SFA amount for these MPRA plans is the greatest of:

Conditions Applicable After the Receipt of SFA

The Final Rule changes certain of the conditions placed on plans that receive SFA. These include: 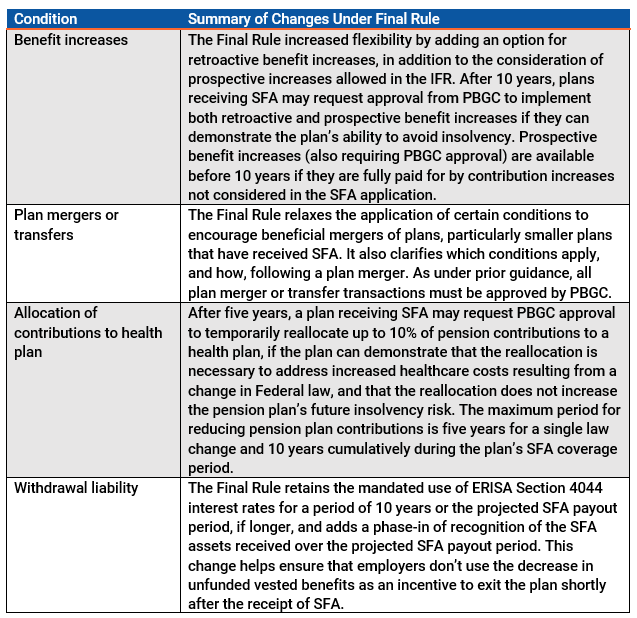 Increased Flexibility in the Application Process

The metering system enacted by PBGC to ensure adequate resources for SFA application review has precluded some plans from submitting an application that establishes an SFA measurement date at the most beneficial date. The Final Rule allows for plans to submit a “lock-in” application so as not to be harmed by the metering process. The “lock-in” application requires submission of certain basic plan information and a statement of intent to lock in base data, with the remaining elements of the full application filed after the e-filing portal reopens.

Transition Between the IFR and Final Rule

The changes implemented by the Final Rule, including the new rules relating to expanded investment options and the use of the bifurcated investment return assumptions, are available to plan sponsors that have already applied for SFA if they submit a revised or supplemental application.

Updates to the PBGC’s American Rescue Plan Act FAQs page for the SFA Final Rule are still pending and should be posted soon. PBGC has made available updated templates for funds to use for submitting SFA applications, including the new supplemental filing available for some funds that have already been received or are in the application review process.

Contact a Bolton consultant to discuss how the changes enacted under the Final Rule will affect your plan.

[1] Program eligibility criteria were discussed in our March 2021 Alert on the passage of the American Rescue Plan Act.

[2] This is the same as the non-SFA interest assumption prior to the application of the interest rate cap of the IRC Section 430(h)(2)(C) third segment rate plus 200 basis points.

[4] The present value of reinstated benefits does not include any adjustable benefits that may have been cut under the terms of a rehabilitation plan. 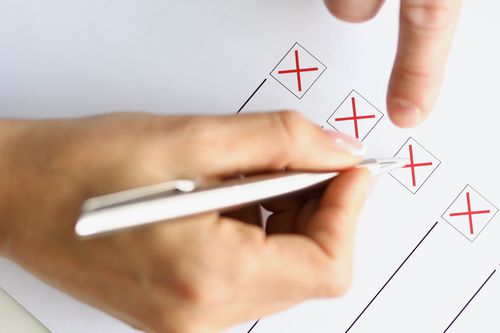 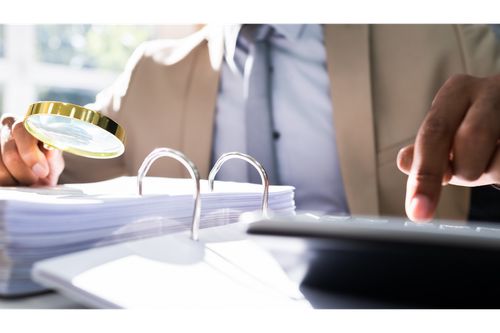 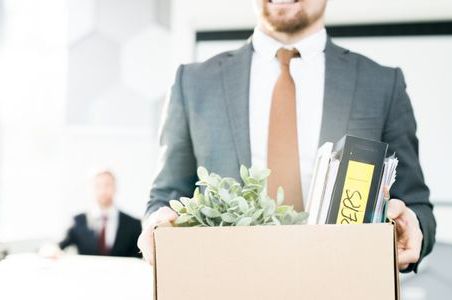